Sign the petition to stop the deportation of Anthony John Makk 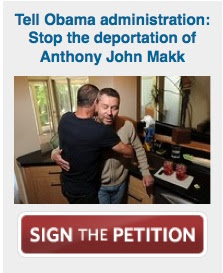 From www.Change.org: Australian Anthony John Makk has been in the U.S. for more than 20 years. He and husband Bradford Wells, an American citizen, have been together for 19 of those years. They've made a life together in San Francisco, where Anthony owns a business. Anthony is also the primary caretaker for Bradford, who is dying of advanced AIDS.

Yet because of the Defense of Marriage Act, Anthony hasn’t been able to get residency through his legal marriage to Bradford -- as an opposite-sex spouse would. Bradford’s request asking that his husband be granted a path to citizenship and Anthony’s application for permanent residency were denied on July 26. As of August 25, Anthony faces the threat of deportation.

After reading about Anthony and Bradford’s situation, New Yorker Matthew Mackey started a petition asking the Obama administration to allow Anthony to stay in the U.S. Already, more than 17,000 people have signed the petition.

Click here to join Matthew’s petition on behalf of Anthony and Bradford. Some days after leaving their home, Bradford is suddenly wracked with pain so severe that he can’t walk. Anthony is the one who picks Bradford up wherever he is, takes him home, and nurses him. Bradford says he has no one else to care for him. If Anthony is deported, Bradford will have to choose: Either he loses his health insurance and leaves the doctors prolonging his life -- or he lives his last days without Anthony.

The Department of Homeland Security can decide not to enforce removal orders -- or even to cancel them -- allowing Anthony to stay. They’ve already done so for other couples. Recently, after more than 12,000 people signed a Change.org petition to save Venezuelan Alex Benshimol’s marriage to Californian Doug Gentry, an immigration judge postponed Alex’s deportation hearing by two years. If Anthony wins a reprieve, the victory will spur momentum for other same-sex couples seeking immigration rights.
Posted by MileHighGayGuy