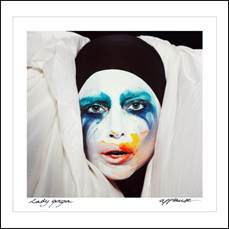 Multi-platinum and Grammy Award-winning artist Lady Gaga has announced that the first single from her long-awaited forthcoming album/app ARTPOP is "Applause", and has released its single artwork shot by Inez & Vinoodh. "Applause" will be available worldwide beginning August 19th, and is the first single from the pop icon's highly anticipated fourth studio album/app ARTPOP, which will hit stores around the world on November 11th through Streamline/Interscope Records.

Due to popular audience demand, the pre-order for ARTPOP will also now arrive on August 19th - two weeks earlier than previously announced. Fans who visit iTunes on August 19th will be able to purchase the single "Applause" and pre-order their copy of ARTPOP with just one click. The single will also be available at digital retailers across the globe at the same time, and CD pre-orders will be available at Amazon.com and other select retailers.

Lady Gaga is set to perform "Applause" for the first time at this year's MTV Video Music Awards, from the Barclays Center in Brooklyn, NY on August 25th.
Posted by MileHighGayGuy