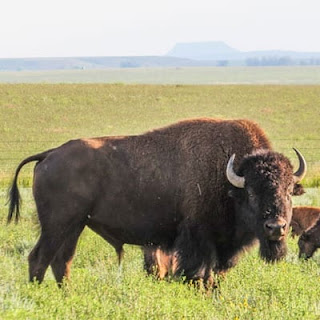 “As wild species continue to face mounting threats, we are working to strategically position our staff and resources to make a meaningful difference for wildlife for many years to come,” said Erica Elvove, Senior Vice President for Conservation Engagement and Impact at Denver Zoo. “Angela’s experience and expertise are a valuable addition to our field conservation team, and allow us to build our capacity to expand existing programs while exploring new projects and partnerships.”

Prior to joining Denver Zoo, Yang helped launch the new Global Center for Species Survival, a partnership between the International Union for Conservation of Nature and Indianapolis Zoo, and served as Chief Conservation Officer at Rainforest Trust, where she led the conservation department in overseeing more than 150 projects to establish protected areas for species conservation around the world. Yang has worked with a variety of international NGOs, including Wildlife Conservation Society and Zoological Society of London, leading conservation programs in Asia, Africa and the Americas, and has authored or co-authored a number of publications.

“I’m delighted to join an organization that has such a long track record in wildlife conservation, and is so well known for its efforts locally and globally,” said Yang. “I look forward to working with our communities and partners to strategically expand our global portfolio, increase our conservation impact, and leverage our stories to engage our zoo visitors right here in Denver.”

The Zoo also elevated the roles of its other field conservationists to manage regions where the wild counterparts of the animals in our care live, and where the Zoo currently operates and may expand in the future, including:

Denver Zoo announced plans today for “Down Under,” an Australian- and New
Zealand-themed experience that will allow guests to get up-close with many of the region’s diverse—and often extreme—species. At its core will be a walk-through wallaby area where guests will be immersed in the animals’ habitat, and the Zoo’s first “conservation station,” which will allow guests to put into practice conservation learnings and actions. It will also feature new and improved habitats for some of the Zoo’s current residents, including cassowaries and keas, and space for educational programming and small events.

“The closure of Bird World in 2019 presented us with an incredible opportunity to create better habitats for our animals and experiences for our guests,” said Bert Vescolani, President and CEO of Denver Zoo. “’Down Under’ will give us the unique opportunity to tell a story about a region that shares a lot of climatic and environmental similarities with Colorado, and inspire wildlife-friendly behavior changes in our community.”

Encompassing the former Bird World site and surrounding areas on the south side of the Zoo, “Down Under” will connect guests and members to the region’s wildlife and ecosystems through awe-inspiring design and engagement opportunities to spark conservation action. It will cover almost 2 acres of the Zoo’s campus with landscaping that mimics the region’s ecosystems, and prioritize outdoor spaces that are resilient and adaptable to Denver’s varying climate. The Zoo is also building relationships with colleagues and indigenous collaborators from these regions to incorporate the role of indigenous knowledge and practices regarding native species and ecosystems.

Denver Zoo has a long history of supporting conservation and wildlife rescue programs in Australia and New Zealand. Since 2018, the Zoo has supported the Kea Conservation Trust, which works to assist in the conservation of the endangered parrot species native to New Zealand, through the contribution of radio transmitters that allow experts to monitor their movements and breeding activity. And in 2020, when bushfires ravaged Australia’s eucalyptus forest, affecting more than 3 billion animals, the Zoo and its donors responded with their support to help wildlife rescue efforts across the continent.

Demolition of Bird World is currently underway, with construction on “Down Under” starting this summer. The Zoo is also in the process of building a new habitat for its Chilean and American flamingos, which is also scheduled to open in 2023. For more information, visit DenverZoo.org.

Things to do in Denver When You're Gay: Denver Zoo Lights 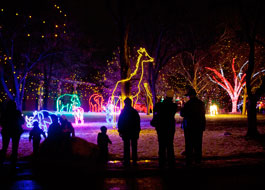 Denver Zoo will be transformed to a wild winter wonderland as guests wander under the canopy of lights throughout themed regions at this year's Zoo Lights. Families can journey to the North Pole region to visit with Santa, enjoy tasty treats at Ms. Claus' Sweet Shop and take a spin on the carousel. In this region folks can also take Denver Zoo's historic train ride, revamped this year with a special theme.
Also new this year is the Festival of Lanterns illuminating Denver Zoo's new award-winning exhibit Toyota Elephant Passage. More than 200 Asian lanterns of various shapes, colors and sizes will shine above the exhibit's walkways with LED light, while guests can get warm and see elephants, fishing cats and small-clawed otters in the indoor buildings.

At the Sea of Lights, light sculpture displays of seahorses, whales and a gigantic octopus swim throughout this wintery wonderland as waves of holiday lights crash upon the shore.

Also new this year, the Celebration! Pavilion will celebrate cultural traditions from around the world through dance, music and storytelling every evening of the event. Entertainment will include African storytellers and mariachi bands.

The holiday tradition is made complete with 40 brilliantly-illuminated acres of lights, featuring more than 150 animated animal sculptures that swing through trees, jump across lawns, hide in bushes and appear in places where they're least expected. Numerous Denver Zoo animals also can be seen throughout the experience including polar bears, sea lions, arctic foxes, Komodo dragons, giraffes, hippos and rhinos. Penguins can also be seen at a nightly demonstration.

Things to do in Denver when you're gay: Do At The Zoo! 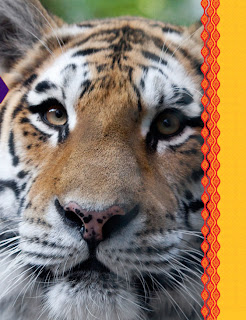 Denver's favorite summer party and Denver Zoo's largest fundraiser, Do At The Zoo is back again! This year, guests can see the newly completed 10-acre, $50 million Toyota Elephant Passage exhibit. Presented by Haselden Construction, Do At The Zoo kicks off at 6 p.m. for VIP early entrance and at 7 p.m. for regular ticket holders on Thursday, June 21. Denver Zoo will close at noon on June 21 to set up for the gala. Tickets for the event are on sale now at www.denverzoo.org.

In its 23-year history, nearly 37,000 Do At The Zoo guests have raised more than $8.5 million to improve Denver Zoo and support its animal conservation efforts. Proceeds from this year's event will assist our efforts to provide the best care to our 3,800 animals. With some extra big mouths to feed, the zoo needs your support more than ever. Denver Zoo's amazing animals give us so much and your support this year will help us give back to them.