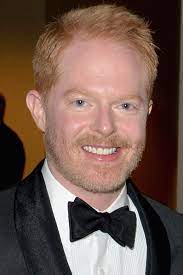 The Betty DeGeneres Advocacy Award is the marquee honor of PFLAG Parent Day and will be presented to Ferguson by the award’s inaugural recipient, George Takei. The award, named in honor of longtime member of PFLAG Betty DeGeneres who is the mother of Ellen DeGeneres, recognizes a person who uses their visibility to help advance PFLAG’s work to create a caring, just, and affirming world for LGBTQ+ people and those who love them.

“I want to thank PFLAG National for inviting me to be a part of PFLAG Parent Day,” said Ferguson. “I’m grateful to be included, mostly as it gives me the opportunity to thank the whole PFLAG family for all the work they do every day to make a better, more equitable world for LGBTQ+ youth and their families.”

Ferguson is an actor, author, producer, host, and longtime advocate for the LGBTQIA+ community. Earlier this week, he was nominated for a Tony Award for “Best Actor in a Featured Role in a Play” for his performance in the critically-acclaimed revival of Richard Greenberg’s Take Me Out. He is perhaps best known for starring for 11 seasons on ABC’s beloved comedy series, “Modern Family,” for which he received five Emmy Award nominations for his work as ‘Mitchell Prichett’, among countless honors. He recently executive produced the BAFTA-winning and Emmy-nominated documentary, Welcome to Chechnya, a searing documentary from acclaimed journalist and filmmaker David France about a group of brave activists risking their lives to confront the ongoing anti-LGBTQ campaign in the Russian republic of Chechnya; PFLAG National was a proud partner on the release of the film.

He also produced the documentary Broadway Rising which will premiere at the Tribeca Festival and tells the inspiring journey back to the stage and the toll of the pandemic on the Broadway community after a historic closure. The feature-length documentary follows subjects from all areas of the Broadway community - stage doormen, wardrobe technicians, playwrights, producers, actors, ushers, dancers, and directors - to paint a full picture of the strength and diversity of the people on the stage and behind the scenes & their resilience, hope and dedication of being part of Broadway’s reopening.

“We at PFLAG are thrilled to honor Jesse Tyler Ferguson with the 2022 Betty DeGeneres Advocacy Award. In his professional career as an actor and off-stage in his life and charitable endeavors, Jesse defines what it means to be an advocate, in every sense of the word. We look forward to celebrating him alongside all of our families on PFLAG Parent Day,” said Brian K. Bond, Executive Director of PFLAG National.

Upcoming, Ferguson’s scripted podcast Gay Pride and Prejudice is set to be released exclusively on Spotify on May 25, 2022. It is a modern adaptation of Jane Austen’s Pride and Prejudice from Spotify and Gimlet. When same sex marriage finally becomes legal, Bennet struggles to find belonging when his chosen family suddenly begins coupling off and settling down. Jesse executive produced and lent his voice to the podcast. Among his countless credits, Ferguson hosted the reboot of HGTV’s “Extreme Makeover: Home Edition” in 2020, as well as the prestigious James Beard Awards in 2017 and 2019. He made his Broadway debut in George C. Wolfe’s revival of On the Town and later went on to star in the Tony-winning musical The 25th Annual Putnam County Spelling Bee. In 2017, Ferguson returned to Broadway and won the Drama Desk Award for Best Solo Performance for his outrageous 40-character turn in the Broadway production of Fully Committed.

Ferguson’s charitable work includes the nonprofit Tie the Knot, which he founded in 2012 with his husband Justin Mikita, raising over 1.5 million dollars for impactful LGBTQ+ organizations. In 2021, Tie the Knot became PRONOUN and continues working against continued oppression, from trans and non-binary loved ones under legislative attack; to the murders of trans women of color, and the need to pass federal  non-discrimination protections in Congress. 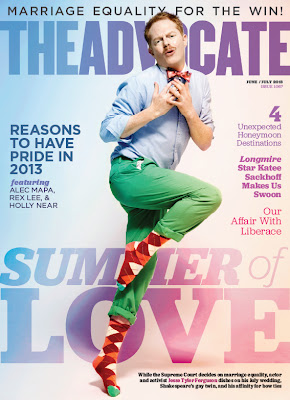 Each summer The Advocate celebrates the reasons to have Pride. For many, including the magazine’s June/July cover star, Jesse Tyler Ferguson, 2013 will be the “Summer of Love.” The Emmy-nominated Modern Family star recently sat down with The Advocate’s Jase Peeples to discuss setting a new standard for LGBT visibility on TV, growing up gay in New Mexico, and how a run-in with the law at a young age helped shape his role as Modern Family’s Mitchell.

“I feel like there are a lot of people who still aren’t comfortable with gay characters on television,” Ferguson tells The Advocate. But what I admire about our show is that it has a plethora of characters for people to attach to, and slowly those people are becoming attached to Mitchell and Cameron as well. It’s kind of like a Trojan horse. We sneak into a lot of people’s living rooms when they aren’t expecting it and maybe change some minds through the back door.”

Despite the progress that Modern Family has made in bringing gay families to the mainstream, Ferguson says he’s received complaints that the show’s gay couple isn’t a positive representation of LGBT people. “We’re always coming up against the criticism that our characters are stereotypical and don’t represent what it is to be gay,” Ferguson says. “But my argument has always been, I know so many people who are just like Mitchell and Cam, and so many people who are nothing like them. We’re representing a very specific couple in gay America and do not represent the entire gay community with those characters.”

Ferguson’s Modern Family character has become a positive pop culture icon for millions of young gay men to admire. Growing up in Albuquerque, however, Ferguson, now 37, thought any positive depictions of gays in pop culture seemed like fiction. By the time he entered high school he turned to the only representation of his sexuality he could find.

“I was caught stealing gay porn when I was 14,” Ferguson remembers with laughter in his voice. “I walked through the metal detector, the buzzers went off, and when they asked me if I had anything, I lifted up my shirt and there was [an issue of] Black Inches.” After a deep breath he strikes a more serious tone and says, “It was handled in a completely inappropriate way, with no tact from the store. They called up my parents and then showed them the nature of the material I’d stolen. I was horrified! I look back and think, How did I survive that humiliation?”

Today, however, that memory serves as a reminder that his work on Modern Family is about far more than entertainment. “[Mitchell] is a character that I play with dignity and one that I think has helped change the landscape of what it means to be gay in America right now,” he says. “Certainly, it’s provided a dialogue and a pop culture touchstone for a lot of people.”
Posted by MileHighGayGuy