As a thank you for being a squirrel friend, an immersive “Golden Girls” experience will be taking place at this year’s DragCon!

With this experience, fans will be able to get lost in the Golden Girls universe and live their 80s-sitcom fantasy as a part of the infamous group of roommates: Rose, Blanche, Dorothy, and Sophia. All attendees of the convention will be able to experience this unique activation, and can catch up on all seven seasons of “The Golden Girls” ahead of the activation - streaming only on Hulu.

Presented by RuPaul and World of Wonder, RuPaul’s DragCon LA is returning for its 10th ever in-person convention — bringing charisma, uniqueness, nerve and talent to the Los Angeles Convention Center for the fiercest year yet. The three-day RuPaul’s DragCon LA is the world’s largest all-ages and family-friendly celebration of drag, featuring vendors, exhibitors, meet & greets, panel and Q&A sessions, plus appearances from drag stars including supermodel of the world RuPaul, and all your favorite dazzling queens from across the global award-winning “Drag Race” franchise. Tickets are on sale now at RuPaulsDragCon.com. 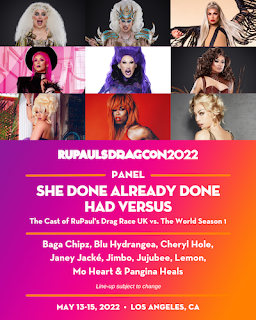 RuPaul’s DragCon LA is sashaying back to the Los Angeles Convention Center for three full days on May 13-15, 2022, and today World of Wonder unveils the very first panel programming announcement for this year’s convention.

Presented by RuPaul and World of Wonder Productions, RuPaul’s DragCon LA 2022 will be the 10th ever in-person convention, and is the world’s largest all-ages and family-friendly celebration of drag.

Each of these newly announced panels will feature cast reunions from fan-favorite series across the globe such as RDR UK vs. The World S1, RDR UK S1 & S2, RDR Down Under S1, Drag Race Canada S1 & S2, and Drag Race Holland S1 & S2. These panels will feature discussions with some of the fiercest, most iconic queens from the franchise.

Additional talent will be announced in the coming months on RuPaulsDragCon.com. The Los Angeles event will include signings and meet & greets with your favorite Queens, fierce mainstage performances throughout the weekend, exclusive panels and programming, wig-snatching merch, immersive activations from RuPaul’s Drag Race and fan-favorite WOW Presents Plus shows.