Cyndi Lauper's Bringing ya to the Brink!

Lucky me just got the new Cyndi Lauper CD, 'Bring Ya to the Brink', in my hot little hands yesterday. I've only been able to listen to a few bits and pieces so far but I'm loving it already. 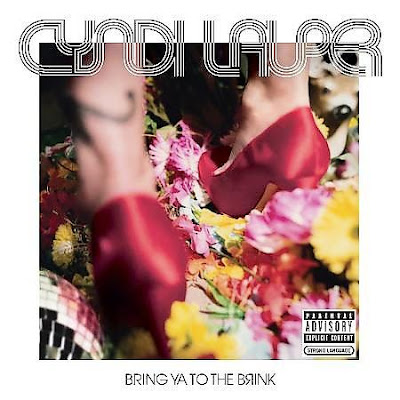 She's always been one of my favorite artists (She's So Unusual was the first cassette tape I ever bought) and, with the establishment of her annual True Colors mega-tour to benefit HRC, there are more reasons than ever to love Cyndi Lauper.

I was lucky enough to interview her a few times over the years (and even hang out backstage at a couple of her concerts) and she's every bit as spunky and sassy as you'd imagine her to be. Read one of my interviews with Cyndi after the jump. 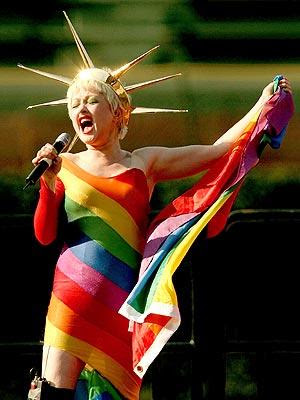 At Last: an interview with Cyndi Lauper
By Drew Wilson

Cyndi Lauper made an indelible mark on the 1980s when she burst onto the scene in an explosion of crinoline, rubber bracelets and Kool-Aid colored hair with her debut album She’s So Unusual. The record spawned four Top Five singles, the first debut album from a female artist to ever do so, and catapulted Lauper to the forefront of American pop culture and the cover of Newsweek as “Rock’s New Woman”. 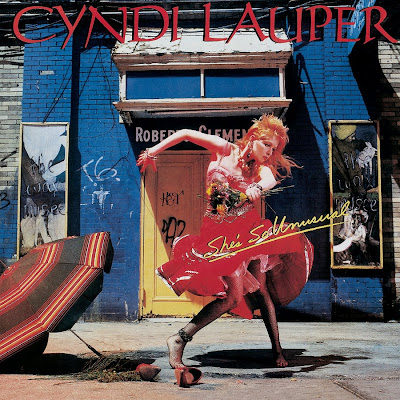 Over the past two decades, Lauper has continued to make music, earning a handful of additional Top Ten singles while expanding her horizons to TV with her Emmy-award winning turn on Mad About You and movies like Vibes, Life With Mikey, The Opportunists. Her latest musical offering, At Last, is a collection of cover songs that hold a special place in her heart.
“They’re all love songs,” she has said, “They’re all from the period when I was growing up, all different kinds of girls and women. I’ve been collecting these love songs since I was five.”

Although Lauper has been touring steadily over the past several years as opening act for such luminaries as Tina Turner and Cher, her next Denver appearance is special because it marks her return as a headliner.

Drew: Cyndi, hi. I’m so glad to hear you’re coming back to Denver!
Cyndi: Hey, how are ya? Yeah, the last time I was there I played in a parking lot, which was good because at least there was a lot of parking.

The first time I saw you in concert was here at the Gothic Theater in 1993.
I remember that, that was an amazing group of people at that concert. And an amazing band. That was the band I always wished to have. Even at the height of my career I never had a band like that. It was a great sound and it was high art for me.

And it was a benefit concert to help defeat Amendment 2.
Yeah, first of all I’m a PFLAG member and my sister and I did a campaign where we took pictures for them. That year was also the first year that my sister and my mom and me were actually on a float for Pride and it was so much fun.

I know I’m preaching to the choir here, but I always tell straight people, ‘do you know anybody who doesn’t have a gay or lesbian person somewhere in their family?’ We’re all family and everyone needs to get out and vote!

Are you very active politically?
No, I’m just a working mom, a musician. I’m a regular punter just like everybody else but I still believe in things and I still vote and I hope that my vote makes a difference because I’m very concerned. I think our country is in a very sad time right now. Do you remember when they lost the ballot box? I thought that was so bizarre! I don’t know how the people in power let that go down unless they had a plan. Scary.

And then Whoopi makes a comment about Bush and they fire her? That’s crazy. I used to take Slimfast to lose weight but it hurt my stomach so bad I felt like I swallowed a plastic product. I just can’t eat that stuff but the fact that they would do it shows you the power of the corporations and how everything is linked to politics. Talk about blacklisting!

As outspoken as you are, do you have any worries about getting fired as a spokesperson for Dr. Pepper?
No, I did one commercial with Dr. Pepper. Big deal! I’m not their spokesperson. I drank the stuff so I figured, why not? I tasted it for the first time on vacation when we went into a Piggly Wiggly and I had never had it but then my kid was drinking it so I figured ‘ok, I’ll drink it’. It tastes really good. It smells funny but it tastes kind of good. I think it’s kind of a southern thing, not that I’m southern.

Not with that New York accent!
Yeah, I know. I always try to lose it but then I hear myself and it’s like ‘oh, my gawd!’ It used to be that every time I did a TV appearance I would get a postcard from the guy who trained Julia Roberts how not to have an accent and it was just like ‘oh, my gawd! Enough already!’

I hope I don’t sound unprofessional, but you are my absolute favorite celebrity. She’s so Unusual was the first record I ever bought.
Oh, honey, I’m not really a celebrity. I’m just a singer/songwriter and I don’t think of myself as anything else although when I’m on the road they always tell me to say I’m an entertainer but then I always think of Billy Joel, (sings) ‘Oh, I am the entertainer!’

You seem very mellow and down to earth…
You weren’t the poor bastard I talked to first thing this morning before I had my coffee! That poor guy, I was killing him!

So where are you right now?
This is our first day of touring on the bus and we’re heading to Eugene, Oregon. My son is up there already and the lady at the front desk is telling him all about some game where you shoot each other but it’s not real bullets but they pop open and hurt you and cover you in paint and he wants to do it but I told him, ‘listen, pal, you’re too young, you’re only six!’ I don’t like guns. But he plays with them, what are ya gonna do?

Do you enjoy touring?
I don’t know-it’s not been an easy trip. This is the first night but it’s just been a bunch of shit. It’s like ten elephants crammed into a Volkswagen. Touring is a pain in the ass. It’s always a pain in the ass and it never goes good but the actual shows and the playing is great.

What do you like about doing the shows and performances?
It’s all about music. It’s not about the brouhaha for me. I don’t have the undulating dancers and all that-they undulate too much and they break my concentration. The brouhaha for me is just the work. It’s just us guys and that should be moving enough and that should mean enough and a lot of times it is. I always figure that once they close the doors you guys are mine. And that’s it. We’re together for the evening and nobody’s leaving until those doors open back up!