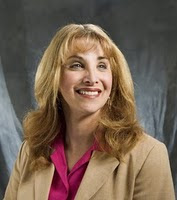 The Human Rights Campaign, the nation’s largest lesbian, gay, bisexual and transgender civil rights organization, sent the following letter today to David Letterman and CBS Corp. in response to a Late Show sketch mocking the appointment of Amanda Simpson (pictured) to a senior position at the U.S. Department of Commerce.

Simpson, who until recently was Deputy Director in Advanced Technology Development at Raytheon Missile Systems and was a test pilot for 20 years, was appointed to be Senior Technical Advisor to the Department of Commerce, where she will work directly with the Under Secretary of Commerce on international trade and national security issues.

In a skit during Letterman’s opening monologue, the host announced Simpson’s historic appointment and revealed that she is transgender, displaying a photograph of her. The show’s announcer, Alan Kalter, then feigned “trans panic,” implying he had some prior relationship with Simpson but was not aware of her gender history, and ran yelling from the stage.

See the letter after the jump.

I am writing on behalf of the Human Rights Campaign, the nation’s largest lesbian, gay, bisexual, and transgender (LGBT) civil rights organization, to express my disappointment over the inappropriate and incendiary remarks made on The Late Show with David Letterman last night on the appointment of Amanda Simpson to a senior position in the U.S. Department of Commerce.

The decision to ignore the fact that Ms. Simpson is incredibly well-qualified for this vital national security position and focus instead on her gender identity reflects transphobia. Ms. Simpson’s appointment represents meaningful progress for the LGBT community and in particular transgender Americans who have faced significant and well-documented discrimination in the workplace and their communities.

You may not be aware that the punch line in your skit has been used as a defense in nearly every hate crime perpetrated against transgender people that has come to trial. For example, the “trans panic” defense was infamously used by Allen Ray Andrade, who was convicted in 2009 of beating 19-year-old Angie Zapata to death with a fire extinguisher after learning of her gender history. According to media reports, it has also been the main defense employed by Juan A. Martinez for the killing of Jorge Steven López Mercado, 19, in Puerto Rico last November.

Your skit affirmed and encouraged a prejudice against transgender Americans that keeps many from finding jobs, housing, and enjoying freedoms you and your writers take for granted every day. We ask that you apologize publicly to Ms. Simpson and the transgender community for this unfortunate episode.

The Human Rights Campaign is America’s largest civil rights organization working to achieve lesbian, gay, bisexual and transgender equality. By inspiring and engaging all Americans, HRC strives to end discrimination against LGBT citizens and realize a nation that achieves fundamental fairness and equality for all.